This paper presents an initial effort in developing a negation detection algorithm for Norwegian clinical text. To support Norwegian text, an evaluated version of Swedish NegEx was extended by translating the negation triggers, adding more negation rules and using a pre-processed Norwegian ICD-10 codes list (2017). The Norwegian NegEx was tested on a corpus containing 170 scientific publications in Norwegian from a medical domain. NegEx found 70 negated findings/disorders. The result is not completely evaluated due to the lack of a gold standard. Need for further preprocessing of the Norwegian ICD-10 codes list for matching findings/disorders as well as challenging erroneous tokenization of Norwegian words were identified. This work pointed out the weaknesses of the current implementation and provided insights for future work.

Negation detectors (NegEx) are available in several languages. However, to our knowledge, Norwegian NegEx has not yet been developed. A Swedish version of NegEx (originating from an American English version [1]) was presented earlier and yielded satisfactory precision and recall when tested on Swedish medical text [2]. This paper presents the development and initial tests of the Norwegian NegEx using the Swedish NegEx as a starting point.

The Swedish version of NegEx [2] was ported to Norwegian and evaluated on a Norwegian medical scientific text in the domain of gastrointestinal surgery. The Norwegian medical scientific text in this specific domain was downloaded from the Tidsskriftet Den norske legeforening (https://tidsskriftet.no/spesialitet/
gastroenterologisk-kirurgi) and transformed from portable document format (PDF) to pure UTF-8 coded text. In total, 170 articles containing 294,745 words were chosen.

A Norwegian version of ICD-10 diagnosis codes and terms (https://ehelse.no/standarder-kodeverk-og-referansekatalog/helsefaglige-kodeverk/kodeverket-icd-10-og-icd-11) was used in the negation detection process. In total, 19,021 symptoms and diagnoses from the ICD-10 list and 23 significant words from the gastrointestinal surgery domain from Table V in [3] were added.

When executing NegEx on the 170 articles, the system found 70 negated symptoms/diagnoses. The NegEx was also executed on a smaller sub-corpus that was manually labelled. Results are represented in Table 1.

For evaluating the Norwegian NegEx, manual labelling of the scientific publication corpus will be continued further to ensure sufficient scope and quality of the testing data. The algorithm improvement will include a more robust mechanism to capture negated symptoms/diagnoses, which currently is based on exact string matching. When the updated NegEx is evaluated on the text corpus, its performance will be tested on electronic health records in gastrointestinal surgery from the University Hospital of North Norway. 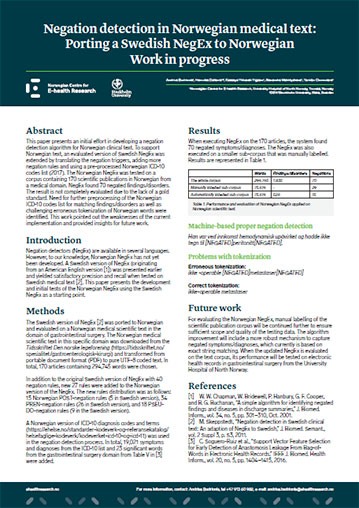